Eachine manufactures a variety of RC products and accessories, from drones, airplanes and cars to FPV cameras, monitors and goggles. It therefore only seems reasonable to believe there should be something to suit every RC enthusiast’s taste. The E520 has been designed to appeal to the beginner and comes with a 4K high definition camera to sweeten the deal – but is flying the drone an experience worth savoring or could it all potentially turn sour?

Our Score for the Eachine E520 Foldable Drone

About the Eachine E520 Foldable Drone 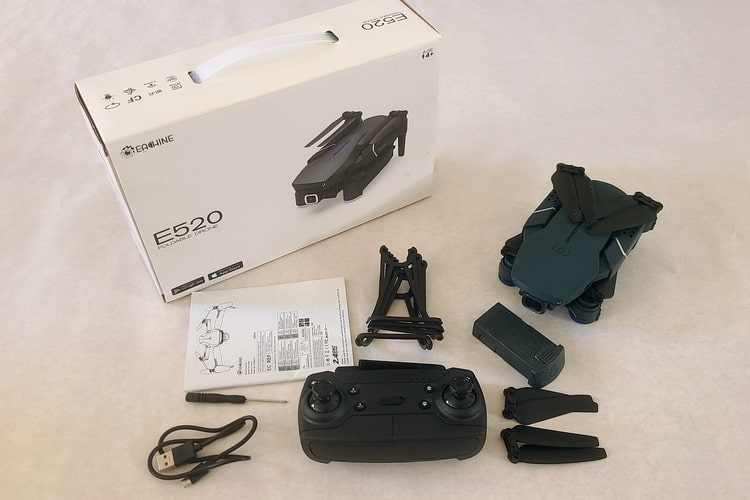 This is a foldable drone, so it should come as no surprise that the packaging should be relatively small and lightweight. The box measures 11.5 x 3.5 x 7.5 inches (29 x 9 x 19 cm) and weighs just under 2 pounds (0.9 kg.) It also has a handle along the top, making it possible to use the packaging as a carry case if need be.

You’ll find the following items inside:

It should be noted that the version supplied for this review only came with one battery, but Eachine is now offering three batteries with each drone. The drone, controller and parts fit into a molded black plastic base, with a clear plastic cover that fits over it. Everything fits quite securely inside the box, with no loose items and the contents being reasonably well protected during transit. 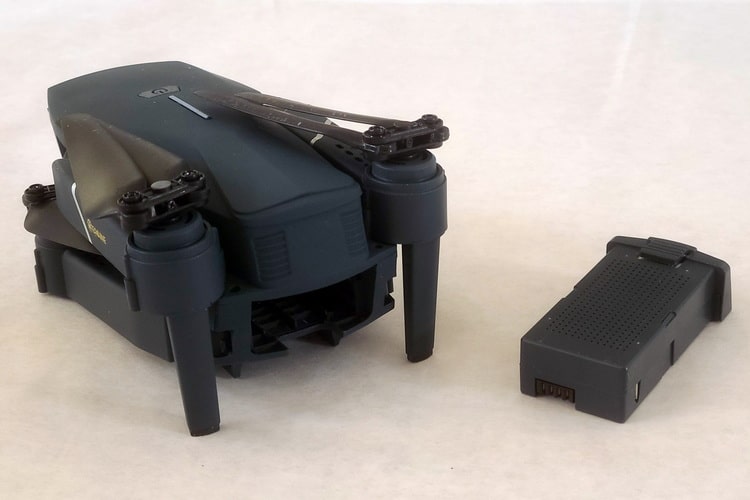 Almost every drone in this price range is “ready to fly” out of the box and requires very little assembly. The E520 is no different; the only thing you need to do is attach the propeller guards and insert the batteries.

As the drone is packed in its folded state, you’ll need to extend its arms before attaching the propeller guards. The front arms each have a claw that helps to hold the underside of the drone off the ground, and these arms must be extended before doing the same for the rear.

(There are no landing skids on this drone, so the claws help to prevent the underside and the camera from being scratched and/or damaged.)

The propeller guards clip onto the underside of the propeller housing and, unlike some other drones, they’re securely attached and have little risk of constantly dropping off. The manual states they should also be secured with the screws provided, but there are no screws in the package and there are no holes in the guards for the screws anyway.

In terms of batteries, you’ll need to find four AAA batteries for the controller and the drone battery takes about an hour to charge.

Inserting the battery into the drone might cause a little confusion at first. It may have just been the particular drone that was sent, but the battery doesn’t easily click into place. You can insert batteries into most other drones by applying just a little pressure, but the E520 battery requires a fair amount of force behind it. Gently pushing the battery won’t do the trick; it almost has to be rammed into the slot and it feels as though you might break it in the process.

Incidentally, there are no directions in the manual on how to accomplish this, but once the battery solidly clicks into place you’re all set.

Beyond these initial steps, everything is pretty standard. There’s no GPS with the E520, so there’s no calibration required there. You’ll need to sync the drone with the controller, but as with other drones, this is easily done by moving the left joystick up and down once or twice. The drone lights then turn solid, indicating the connection was successful. 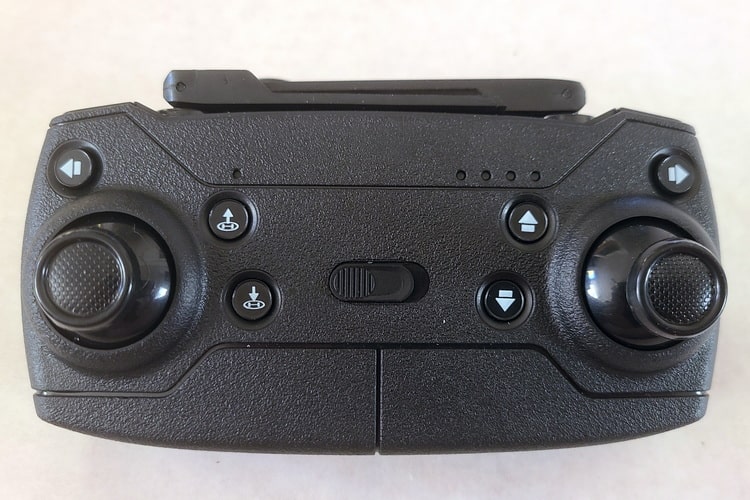 For the most part, the quality doesn’t seem to bad; the controller is plasticky and feels hollow and lightweight, but that’s not unusual for drones in this price range. The smartphone holder is built into the bottom side of the controller and is partially spring-loaded to help open and close the holder.

It’s this holder, in particular, that feels flimsy and it doesn’t do a great job of holding the cell phone securely. There is no lip to stop the phone from popping out, which can easily happen if you knock the phone while it’s held in place. Again, this isn’t unusual, but there are definitely a few other drones available that do a better job.

The buttons and joysticks are fine and the layout is pretty standard, but if you need a little help, the controller comes with a card overlay that explains the function of each button. (Incidentally, this is one controller where the trim is adjusted through individual buttons, rather than as an extra function of a joystick.)

Lastly, the controller has two antennae that can be folded out, although it’s not really clear if this has too much of an impact on the operation of the drone, as it seemed to fly well with or without the antennae extended.

As for the drone itself, it folds up neatly into a compact form measuring 6 x 4 x 3 inches and weighing 8 ounces – small enough and light enough to be easily carried in your hand or in a bag. (There’s no case provided, but the packaging can be used as a case instead.)

Even though it only weighs half a pound (just below the limit set by the FAA for drones requiring registration) it seems reasonably solid. The front even has an anthropomorphic design that gives it the appearance of a determined and angry face. 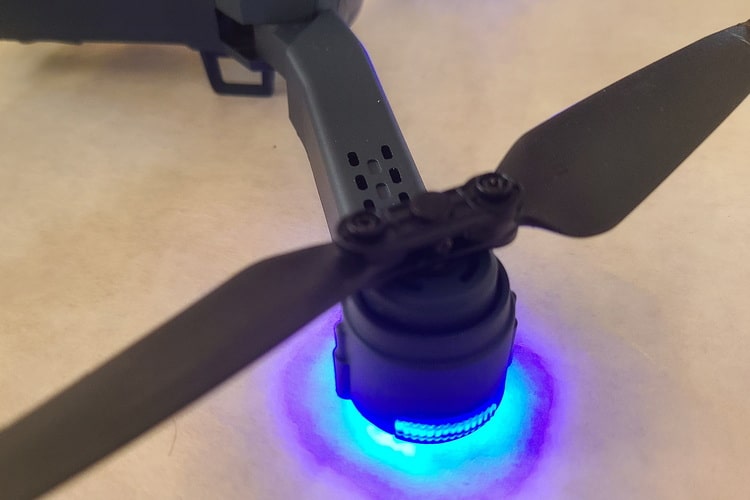 Generally speaking, the drone flew quite well and was easy enough to control. The one-key take-off and landing buttons worked well, there wasn’t much need for trim and the camera did a good job of capturing images and video. As the drone has no GPS, the functions are pretty straightforward, making the drone easy to fly for both beginners and more experienced flyers.

Once you get the hang of things, you can download and install the app, which will allow you to fly the drone via your cellphone. The drone broadcasts its own wi-fi network (typically something like WiFi-4k-520-######) and you’ll need to have your phone connect to this network in order to control it or record images and video directly onto your phone.

That said, it’s typically easiest to forgo the phone and stick to the controller, as trying to fly the drone via your phone’s touchscreen can be a little tricky.

The following features and functions can be performed exclusively through the app and are better suited to advanced users. It should be noted that the instruction manual doesn’t do a good job of explaining the app’s functions and controls, leaving it to the user to figure it out. 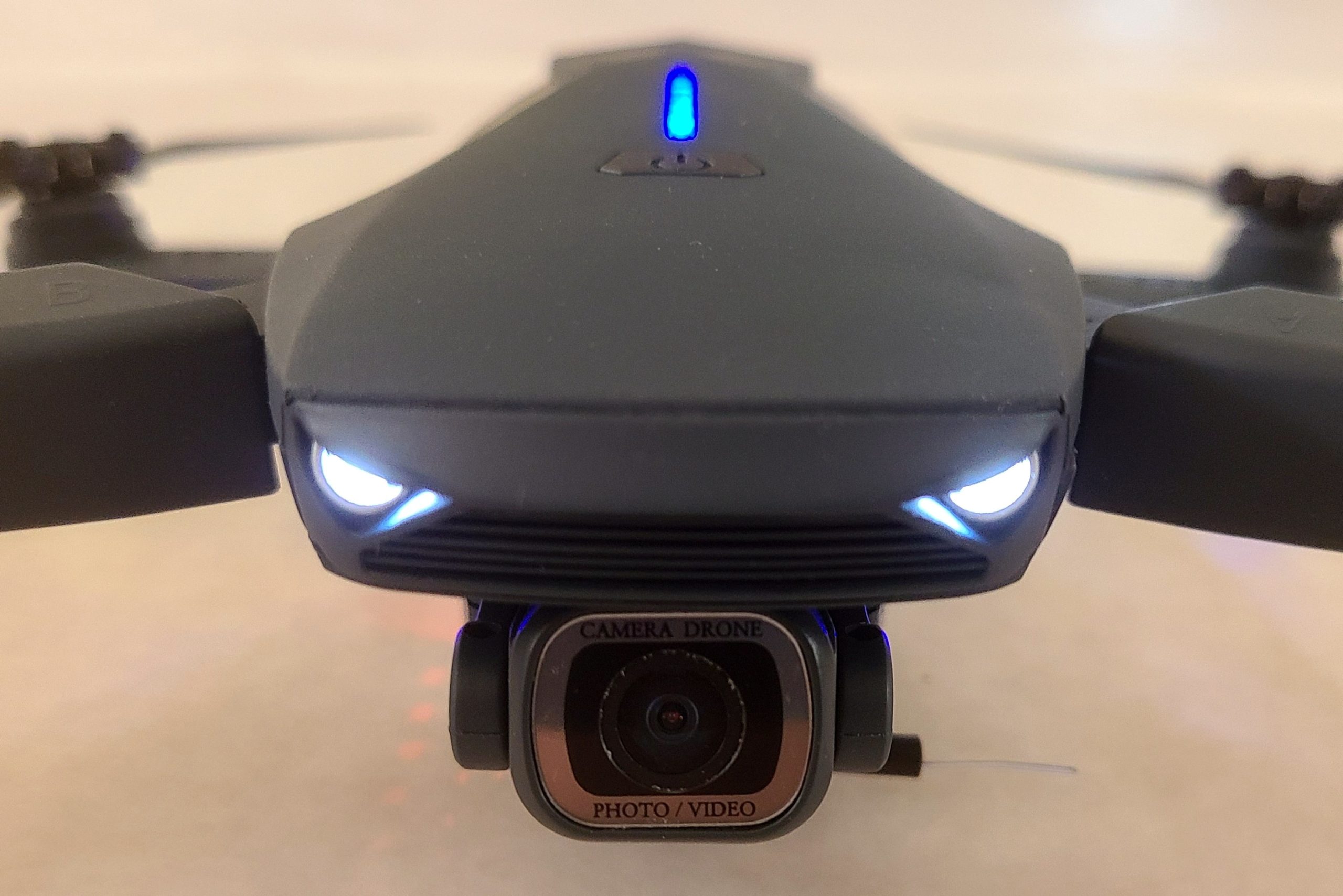 The E520 has clearly been designed with the beginner in mind and is priced appropriately to appeal to that segment of the market. Most experienced flyers will probably find that it lacks the features they might otherwise come to expect, especially GPS and auto-return, but otherwise, it’s a good starting point for anyone looking to get into the hobby. Similarly, families are sure to have fun with it, but younger kids will most likely find it a little difficult to control.

The E520 is a great option if you’re looking to buy your first drone – especially if you want to shoot some hi-res video. Its compact, lightweight design makes it highly portable, and it has all the most essential features you need to get started. However, more experienced flyers will probably find it doesn’t have enough to hold their interest and may find its lack of features off-putting.

If you’re looking for more information about drones, we’ve created a series of guides to the different drones available. You can check out our overviews of the best drone for kids and the best drone under $200.