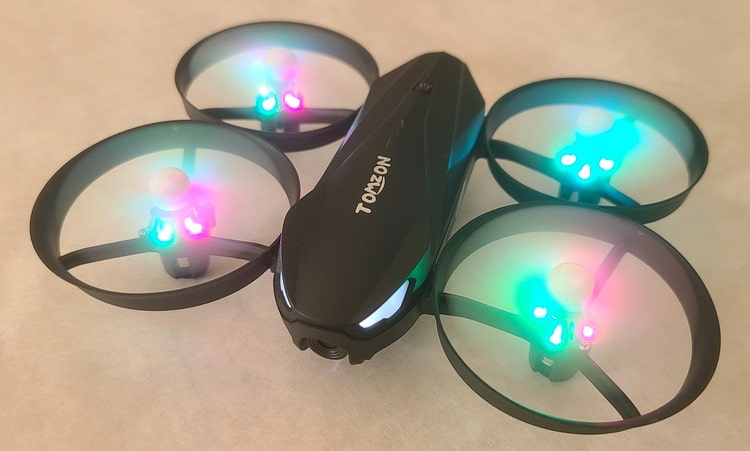 Tomzon manufactures electronic toys for a wide age range of children and have a number of drones available for families to enjoy. There’s one, however, that younger children can potentially fly, and with a cool name like “Flying Pig” and propellers that are lit with changing colors, the Tomzon A31 (available here) sounds hard to resist. So did Tomzon bring home the bacon or are they simply trying to make a silk purse from a sow’s ear?

Our Score for the Tomzon A31 Flying Pig Mini-Drone

About the Tomzon A31 Flying Pig Mini-Drone 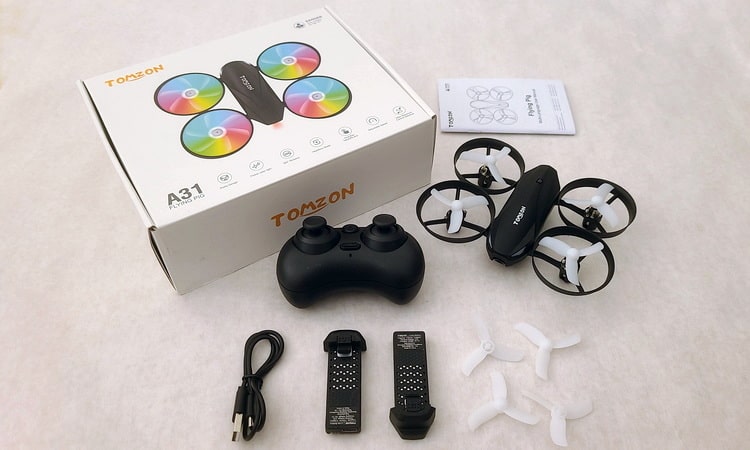 Given that this is a mini-drone, the packaging is fairly compact and lightweight. The box measures 9 x 7 x 3 inches and weighs just 14 ounces, making it an ideal size and weight for a birthday or holiday gift. Inside you’ll find a thin foam layer covering the drone, controller and accessories that lie in the molded foam beneath. Each component fits in quite snugly and should be well protected during transit.

The contents of the box are as follows:

Although two batteries are provided, there’s only one USB cable and there’s no USB charger, so you’ll need to plug the battery into a cell phone charger or a power strip with USB ports in order to charge it. Also, be sure to have three AAA batteries as you’ll need those for the controller. 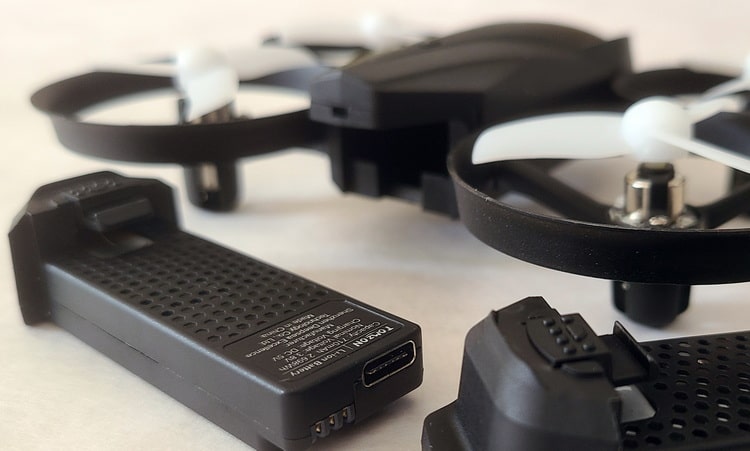 In essence, the drone comes fully assembled, as the propeller guards are already attached and the only thing you’ll need to do is insert the batteries into the controller and the drone.

There are two rechargeable batteries provided, but only one USB Type C cable. If both your batteries need charging when you first go to use the drone, you’ll either have to find another cable and wait an hour for both to charge, or else charge each one individually for a total of two hours. That’s a long time if you’ve got kids who are anxious to see the drone in action!

Once you’ve got the batteries installed, the drone and controller can be powered on. The drone needs to be on a flat surface, as the gyros will need to calibrate. The drone and controller will then match frequencies and then you’ll need to calibrate the drone itself. This is done by pushing both controller joysticks down and inward until the drone lights stop flashing. Lastly, you can start the rotors by pushing both joysticks down and outward at the same time.

At that point, you’re ready to go. 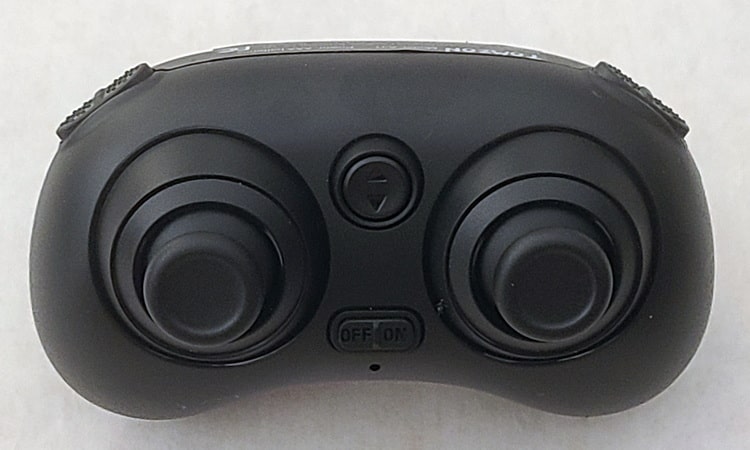 This is a small, inexpensive drone that’s primarily meant for use by children; with that in mind, it should be noted that this isn’t built to the highest possible standards – however, it should be up to the task for which it was designed.

Pretty much everything is plastic and lightweight. The controller is very small but a good size for children to easily hold and use. Being so lightweight, this isn’t really a drone you can use outside (unless the air is absolutely still) as the slightest breeze will blow the drone away. If you intend to let younger children use it, it’s best to do so in a room with few obstacles and under adult supervision.

Despite the plastic being thin, the guards do a surprisingly good job of protecting the propellers and the drone bounces gently off walls without too much trouble. The white propellers hide any scratches (whereas the black propellers on other drones will show the slightest mark) but the body of the drone can potentially be marked easily.

The odd thing about this drone is that there’s clearly a camera at the front, and yet there’s no mention of this anywhere on the packaging or in the instructions. There seem to be several Tomzon apps that could, theoretically, work with the drone but none of the ones tested seemed to do the job.

There’s also no micro SD card slot anywhere on the drone’s body and so the drone is incapable of recording video itself.

The existence of the non-functional camera is made all the more frustrating because it can be tilted up and down, and if there was a way to take photos or record video, it could probably capture some nice shots. 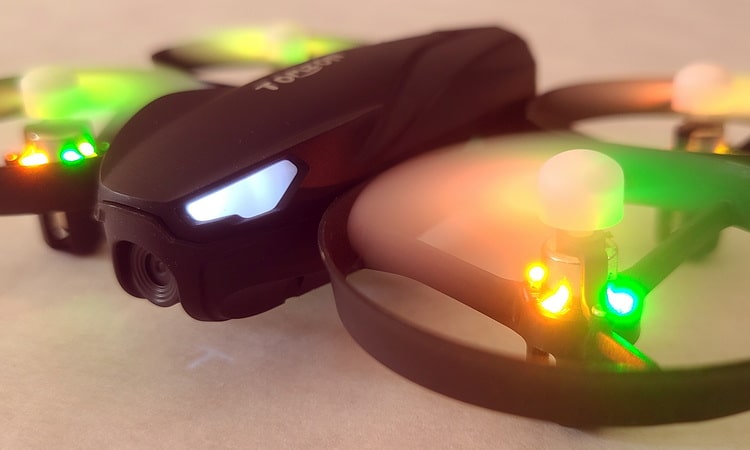 While this shouldn’t be a problem for older operators, younger children may find this confusing and it may be best for them to stay with the basic features.

It’s also worth noting that there’s no way to alter the speed of the drone, and it tends to move pretty quickly. If the joysticks aren’t moved gently, the done can suddenly move in an unintended way and the operator can easily lose control.

With this in mind, it’s probably best for younger kids to only fly this drone inside and in a room where there aren’t too many obstacles. For example, an empty garage could be a good choice. 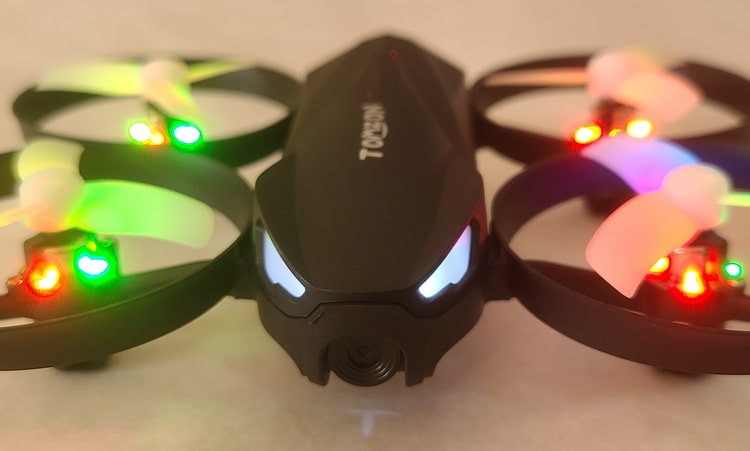 Although the packaging states this drone is only suitable for children 14 years old or over, this drone is clearly designed with younger kids in mind. Teens and preteens shouldn’t have any problems flying it, and even younger children will probably be able to get the hang of the basic features with a little practice.

Adults may also get a kick out of it, but the lack of camera functionality will probably prove to be a little frustrating for some.

As it goes, the Tomzon A31 (available here) isn’t a bad drone, especially for younger kids who are looking for a fun drone of their own. Its lack of a camera (or at least, one that works) will be a little off-putting for some, but otherwise, this is a good choice for your kid’s first drone. It may not be premium bacon, but it’s no sow’s ear either.  And besides, what kid doesn’t want a drone called “the flying pig”?

If you’re looking for more information about drones, we’ve created a series of guides to the different drones available. You can check out our overviews of the best best drone for kids and the best drone under $200.