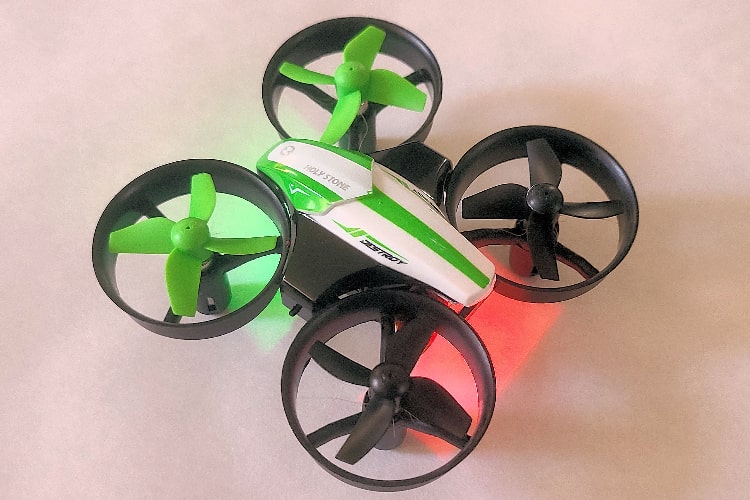 If you want a remote control drone for the kids but don’t want to spend a ton of money, the Holy Stone HS210 Mini Drone (which you can buy here) might just be the answer. It’s small enough to be taken everywhere and has many of the basic features you’d expect from a more expensive model. But does it have what it takes to keep the kids entertained?

Our Score for the Holy Stone HS210 Mini-Drone

About the Holy Stone HS210 Mini-Drone 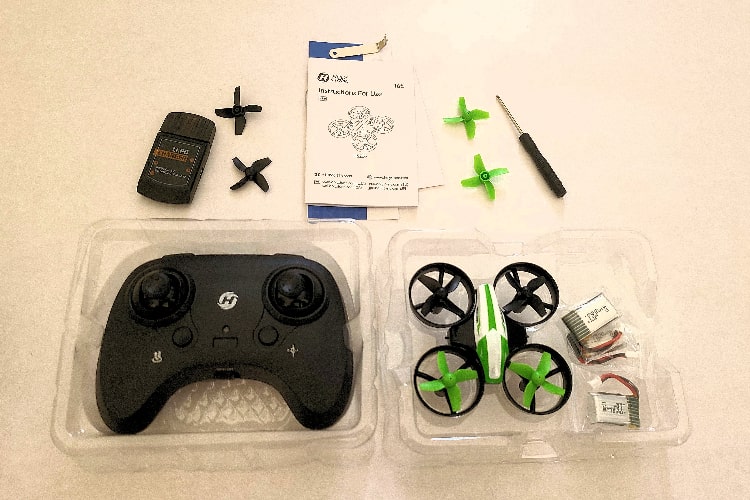 The HS210 arrives in a relatively small box that measures just 6.2 x 5.1 x 3.5 inches and weighs only half a pound, making it the perfect size for a gift bag. The box is sturdy enough to protect the drone in transit and has an attractive but minimalistic design.

The molded plastic packaging inside has two halves. The top half contains the drone itself and three small, rechargeable batteries, while the bottom half contains the controller. You’ll also find a couple of plastic bags with the instructions, warranty information, accessories and spare parts.

Unboxing the drone and accessories presented no problems; there was no tape, clips or ties holding things together, allowing the packaging to be quickly and easily removed.

It’s worth noting that while you’ll get three small rechargeable batteries for the drone, there are no batteries provided for the controller. You’ll therefore need to have three AAA batteries nearby before you get started.

The drone batteries are very small and have a short cable with a square plastic clip at the end. The clip attaches to the USB battery charger; it resembles a flash drive and can either charge one battery on its own or both batteries simultaneously.

You can plug the charger into any USB port and it will start charging the batteries clipped into it. This means you can potentially plug it into any number of different devices to charge your batteries, as long as it has a USB outlet. For example, you can plug the charger into your computer, a power strip, your car, or even a portable USB charger.

Both the charger and the batteries are small enough to fit into your pocket or a small bag or pouch. This, coupled with the ability to plug the charger into any USB port, means you can potentially charge the batteries on-site, without having to wait until you get home.

There is, of course, a caveat. The batteries will take anywhere between 40 and 60 minutes to charge, and while you can fly the drone while you wait, you’ll probably still find the drone will run out of juice before the replacement batteries are ready.

(Incidentally, the batteries are 3.7V Li-Po batteries with a capacity of 250mAh, and while you shouldn’t have any difficulty finding batteries of this type, it might be tricky to find batteries with the same physical dimensions.)

The charger has a charging indicator light for each battery that glows red while the battery is charging and then turns green when charging is complete. 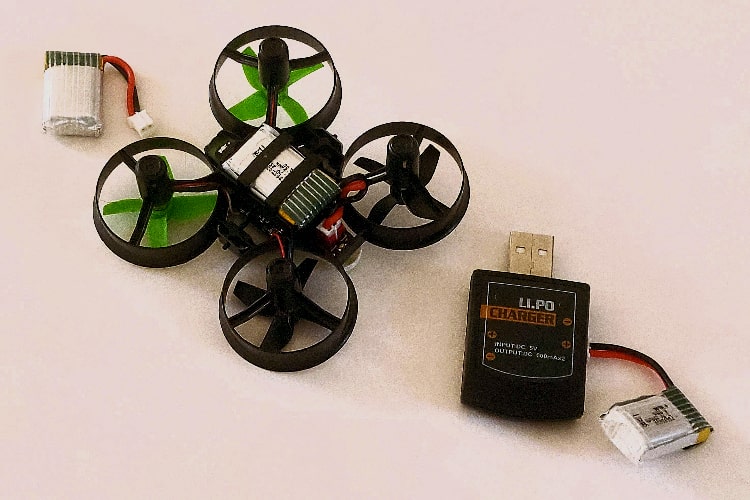 Inserting the battery into the harness was a little fiddly, but otherwise, there were no other problems and the battery seemed to fit quite snugly and securely.

Similarly, there’s a tiny screw holding the battery cover on the controller in place, which is also somewhat awkward to remove and then replace. It also seems rather redundant as the cover can be easily clipped into place without any danger of it becoming loose or detaching from the controller.

If you have young children and you’re concerned that they might open the cover and swallow the batteries, then it might be a good idea to keep the screw in place. Otherwise, you can probably permanently remove the screw without experiencing any issues.

Installing the batteries is the only assembly that’s required and once the batteries were charged, it only took a few minutes, so if you have kids who are anxious to see the drone in action, they won’t have long to wait.

Once the batteries are in, you’ll need to pair the controller with the drone. This is done by simply pushing the throttle joystick on the controller up and down. The two pair almost immediately and without any problems.

The last step before you start to fly is to calibrate the gyro. This is easily done by pushing both joysticks simultaneously to the lower left, causing the lights on the drone to quickly flash and before turning solid and for the controller to beep twice. 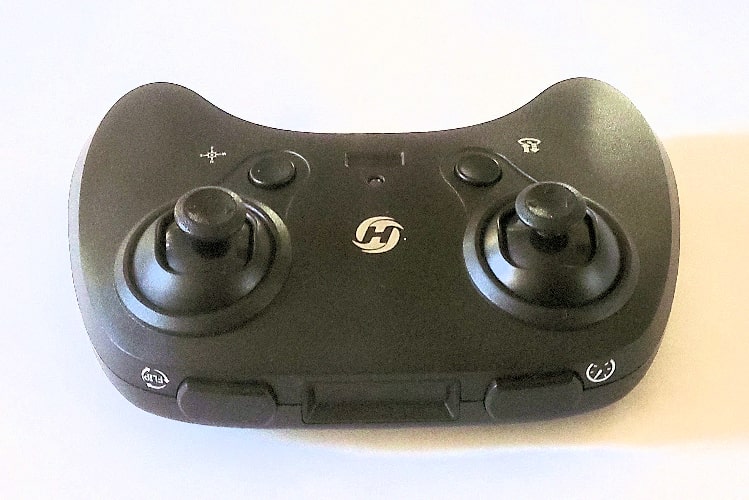 The drone weighs next to nothing and feels pretty flimsy, but although the plastic isn’t very thick, it seems to be sturdy enough. All the same, it’s a good idea to be careful when attaching and removing the battery, as the plastic feels like it could break if too much force is applied.

The battery is also a little tricky to remove as the plug is tiny and requires you to pinch the sides in order to pull it out.

The remote control feels similarly flimsy and, in fact, the left button stopped working on the second time out. This is the button that changes the speed of the drone and activates the “circle fly” feature, causing it to fly in a small circle. The controller wasn’t dropped or mistreated, but while all the other buttons click when you press them, this no longer happens for the left button.

Since the speed adjustment and circle fly features weren’t tested before the button stopped working, those features have not been reviewed.

The other buttons and joysticks all operated without any issues, with the joysticks working particularly well.

All this being said, the drone can bump into walls and objects and drop straight to the floor without any apparent damage. The propellers are encircled by protective barriers, but should you need to replace them, Holy Stone has provided two spare propellers of each color. (Unfortunately, there’s nothing in the instructions detailing how to replace them.) 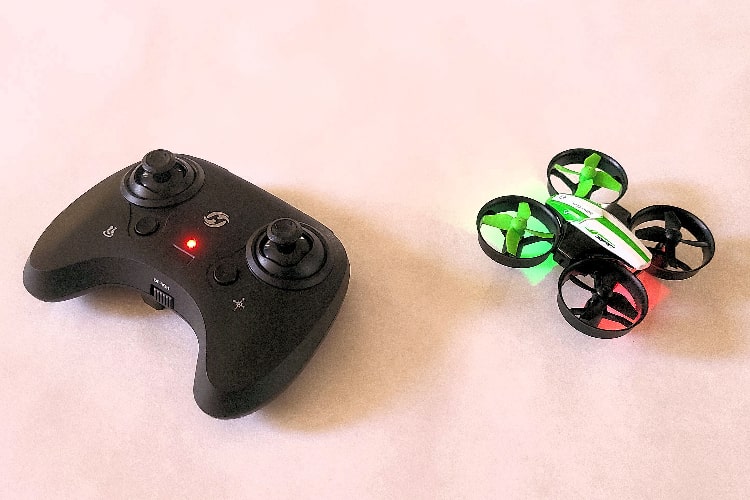 The instructions state not to use the drone indoors, but realistically, it’s so small and light that it’s easily blown away by the slightest breeze outside. The drone was tested in a living room and, besides the obstacles, it worked just fine. If it does hit anything, it’s light enough that it won’t cause any damage.

You should be able to get everything up and running within a few minutes (assuming the batteries are charged) and you certainly won’t need to read the entire instruction booklet to start flying. The done is fun and relatively easy to use, and even young children can potentially fly it without much trouble.

There’s a green light at the front of the drone at a red at the back. These lights help you to remain oriented as you steer the drone, but if you find the drone getting away from you, you can always use the Auto Land feature.

Lastly, the propellers are easily jammed (albeit temporarily) with pet hair, so if you have a dog or cat that likes to shed fur, you’ll need to watch out for that.

It’s a little unclear as to whom Holy Stone is targeting with this drone. The product description on Amazon mentions children and even toddlers, with the associated images depicting both. However, the manufacturer’s recommended age states 14 years and up.

Can younger children operate the drone? Yes; children as young as five can potentially handle the basics (up/down, left/right and forward/backward) without too much trouble. With that in mind, it’s probably best to say that the drone is aimed at families, with younger children being able to operate it under adult supervision.

While obviously lacking the bells and whistles that might come with larger, more expensive products, the HS210 (which you can buy here) is a fun drone that can be easily used by the younger members of the family. It might be too light to be flown outside, but this makes it a great option for indoor use on a rainy (or windy!) day.

If you’re looking for an inexpensive option for the kids to play with, or simply need something small and simple to practice with, then this drone could be the one for you.