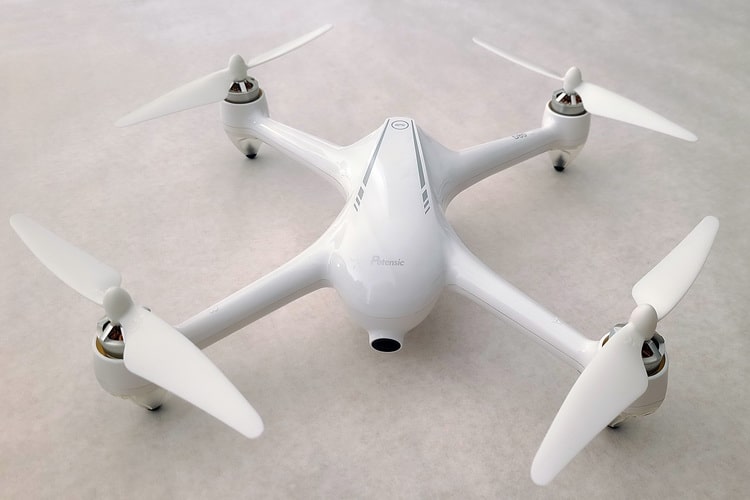 Potensic produce drones that range in size and price depending upon your age and experience. Everything from the small and inexpensive mini drones for kids, the mid-priced drones to the more expensive, feature-packed options for more experienced flyers, Potensic has a drone that’s suited to your needs, your experience and your budget.

The Potensic D80 (which you can buy here) is designed for those who maybe have a little experience under their belt and are looking for a drone that can deliver the goods in terms of performance but without dropping the ball on price. Will it give you more bang for your buck in the air or simply a bang as it hits the ground?

Our Score for the Potensic D80 Drone

About the Potensic D80 Drone 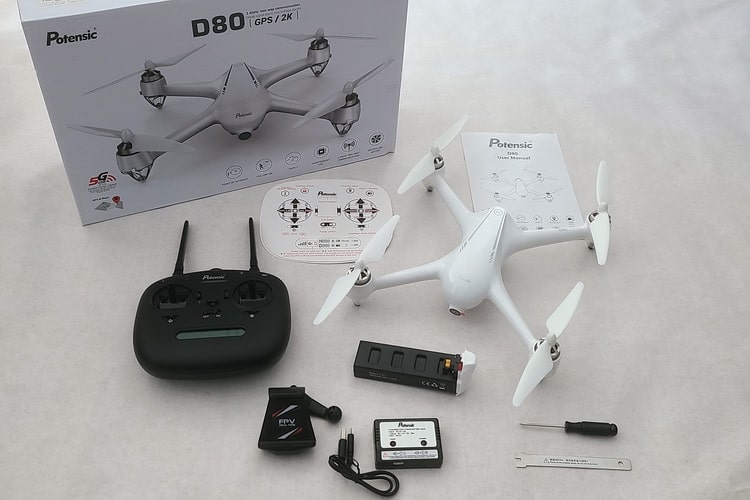 The packaging is pretty solid – the box measures 17.0 x 11.5 x 5.5 inches and weighs four pounds. It’s nicely and attractively designed; if you intend to give this as a gift, the recipient is sure to be excited just by seeing what’s shown on the packaging alone.

NB: we tested the basic version, which did not come with a carry case or second battery. The version tested is no longer available on Amazon, but you can buy the upgraded version (with case and extra battery) here.

The drone and accessories are held very securely by a large, thick polystyrene molded block, which should keep everything protected against any knocks that might occur during transit.

The drone and smaller accessories (i.e., the battery, charger, instructions, etc.) are on the top, while the controller can be found on the bottom. 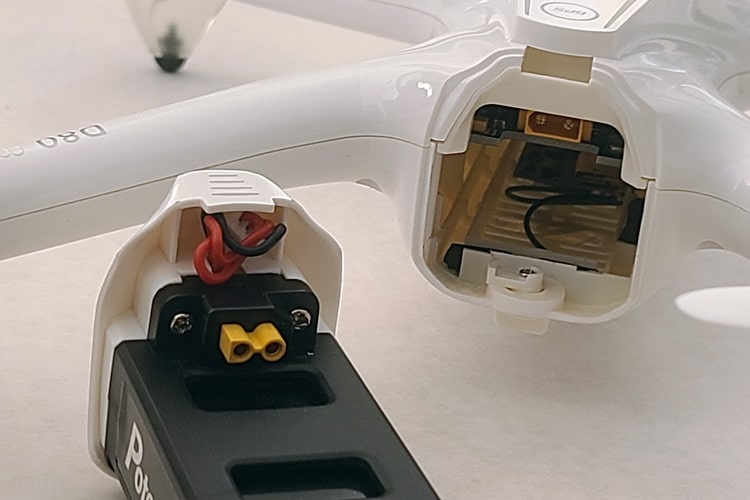 If you’ve owned and/or used a drone before, there’s a Quick Start Guide to help get you up ‘n running as quickly as possible. This folding card includes a useful overview of the controller and is worth keeping nearby as you familiarize yourself with the drone and its capabilities.

In terms of the user manual, it’s fairly slim as there’s actually very little assembly required here; the drone doesn’t have propeller guards, and the rest of the manual predominantly serves as a guide to the functions of the controller and the features of the drone itself.

Controller batteries aren’t included and you’ll need to have four AA batteries on-hand, and you’ll also need to first charge the drone battery, which, unfortunately, does take a while – five hours, in fact. This could be a problem if you’ve got kids (or even older family members) who are keen to give the drone a test flight.

The battery is slotted into the back of the drone (make sure you remove the dust cover from the battery connectors first!) and the drone will then automatically power on. The lights located at the bottom of the propellers will then flash as the drone attempts to connect to the controller.

The drone then has to go through three more steps before you’re ready to go:

If you want to shoot video or capture images, the drone has a micro SD card slot on its right side, while if you want to use your smartphone to record images and video, you’ll need to download and install the Potensic-M2 app. Besides being able to store video and images, the app can also be used to fly the drone and to make use of some of the more advanced features, such as the way-point flight.

The included cellphone holder is attached to the controller and can be tilted and swiveled to get the best viewing angle. It’s easy to insert and remove and is able to hold and support the phone in its case, without the weight of the phone causing the holder to drop. 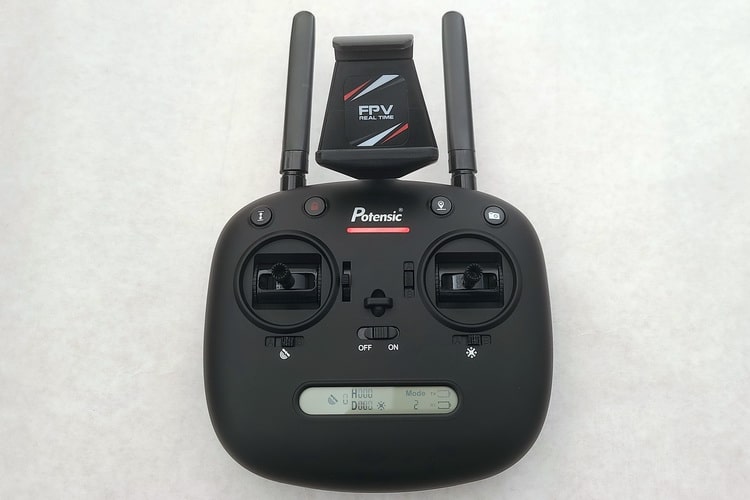 As the drone might be considered a mid-range model, it should come as no surprise that both the drone and the controller feel pretty solid and durable.

Both joysticks can be easily moved in a circular motion (as opposed to simply to the left/right or up/down) and there are two switches below the joystick: the left switch activates either GPS or Gesture Mode and the right switch activates Headless Mode.

There are four buttons along the top of the controller. From left to right, they are One-Key Takeoff/Landing, One-Key Unlock (used when first activating the drone before flight), One-Key Return and a button to capture images and video.

Curiously, there are several switches and buttons that do nothing and have no purpose; there are two switches between the joysticks and two buttons on the underside of the controller.

The drone itself is made of plastic but still has a decent weight to it. There are lights under each propeller, and each light is capped with a small rubber tip to help absorb the shock of landing on a hard surface.

There are no propeller guards and no replacement propellers either. The propellers are also thin and could be potentially easily damaged, so care must be taken not to fly the drone near any solid obstacles. For that reason, this drone is not one that should be flown indoors.

Unfortunately, the camera is fixed and cannot be moved; however, it’s capable of capturing images at 2K resolution (2048 x 1080) which is slightly better than blu-ray quality. There’s a micro SD card slot on the right side of the drone for onboard recordings.

If you’d like to capture images and video directly onto your smartphone, you’ll need to download and install the Potensic-M2 app and then connect to the drone’s wi-fi signal. The Wi-Fi network will appear on your phone as something like drone_D11A0D. 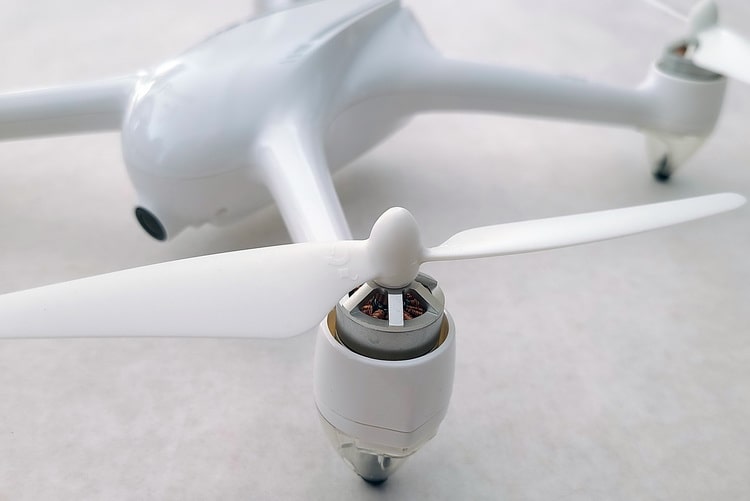 Generally speaking, the Potensic D80 (available here) performs admirably, with only a little drift (which is just as well because there doesn’t seem to be a way to adjust the trim.)

The primary features and functions listed below can be easily performed via the controller with the push of a button and/or the movement of a joystick, with many of them also available via the app. It should be noted that there are no trims, flips, stunts or emergency stops with this drone. 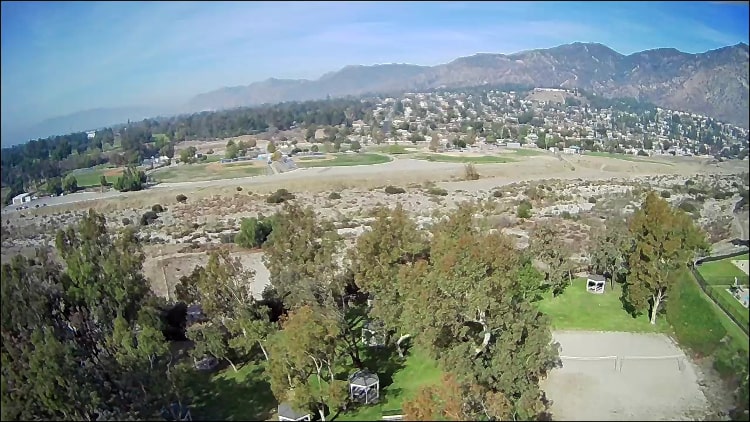 The following features and functions can be performed exclusively through the app: 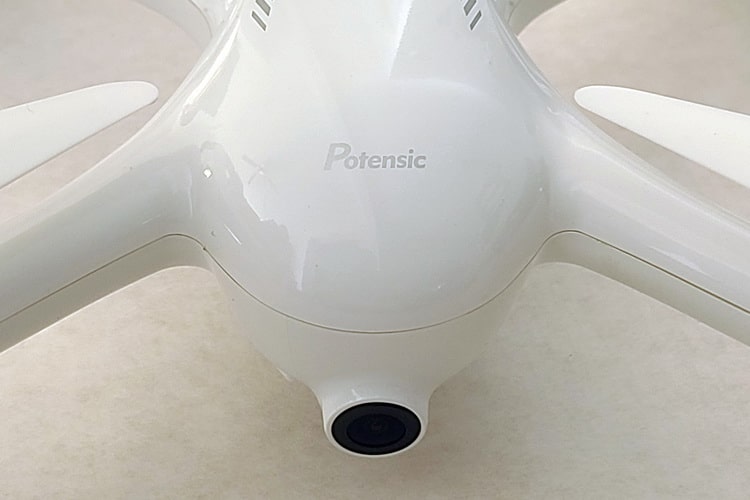 Although it could potentially be flown by a beginner, the D80 has really been designed for the intermediate adult pilot who’s looking for a good mid-range drone. It’s not a toy, and younger kids may have some difficulty controlling it, but if they’ve had previous experience flying more basic drones, they may be able to fly it under supervision.

Teenagers may need a little help at first, but once the basics are mastered there’s no reason why they shouldn’t be able to fly it on their own.

While not the most inexpensive option, if you’re looking for a drone that’s easy to control, flies well and can shoot high-resolution video, then the Potensic D80 (available here) could be the one for you. It’s not the best choice for younger kids, but teenagers and adults shouldn’t have any problem making the most of its features and having a lot of fun in the process.

If you’re looking for more information about drones, we’ve created a series of guides to the different drones available. You can check out our overviews of the best kids drones with a camera and the best drones under $200 with a camera.