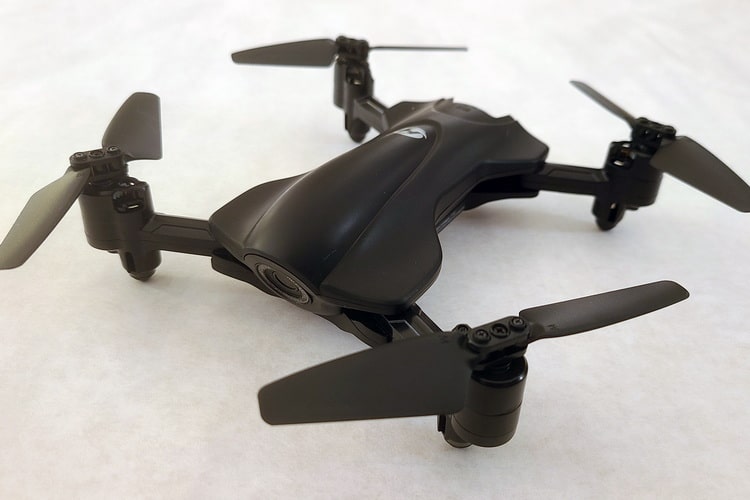 Holy Stone have a pretty solid reputation for producing easy-to-use that both beginners and intermediate fliers can enjoy without having to dig deep into their pockets. The Holy Stone HS165 Foldable Drone (which you can buy here) has been designed to be taken almost anywhere and flown by almost anyone, and with built-in GPS, it’s capable of flying back to base by itself. So have Holy Stone brought it home with this drone or did they miss the mark?

Our Score for the Holy Stone HS165 Drone 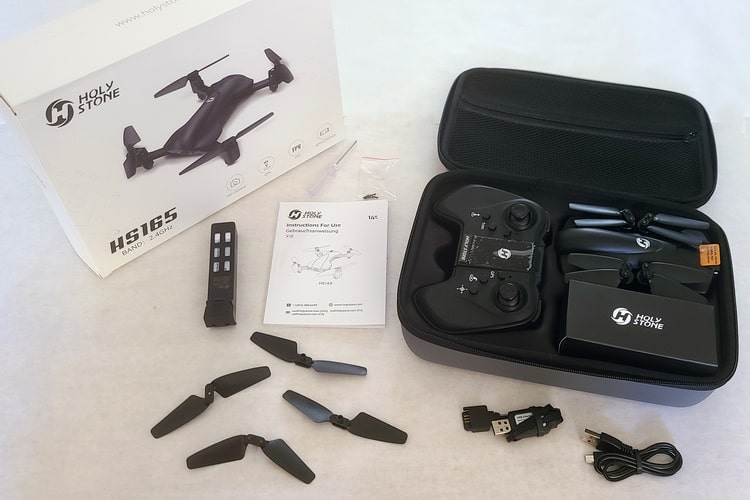 Holy Stone has its own particular minimalist, black and white packaging design which helps them to stand out from the crowd a little. The packaging is also typically fairly compact; there’s no space wasted with unnecessary plastic packaging that’s simply there to make the box look bigger.

Inside the box you’ll find a semi-hard carry case with the drone and accessories neatly packed inside: 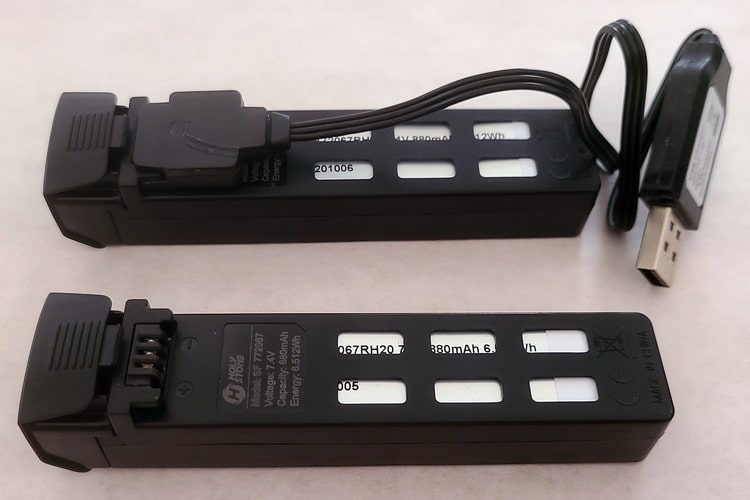 This being the case, the first thing you’ll want to do is make sure the drone and controller batteries are charged. Unusually for a drone this size, the controller has a built-in rechargeable battery; it’s charged with the provided USB C cable, but there’s no charger, so you’ll need to plug it into your own charger or into a power strip with USB ports.

It’s a similar story with the drone battery. Two are included, with one already inserted into the drone. Unfortunately, there’s only one cable, and unlike the controller battery, you’ll need a specialized cable to charge it. You won’t be able to use a regular USB cable with the drone batteries.

That said, both the controller and the drone battery charged within an hour.

After charging the batteries and inserting one into the drone, you only need to fold out the arms of the drone and power it on. The drone power switch is a little odd as it’s on the underside and looks more like a tiny screw.

Next, you’ll need to power on the controller and wait for it to pair with the drone. This only takes a few seconds and then you can calibrate the compass for the GPS. This is done by simultaneously pushing both joysticks on the controller upwards and inwards and then rotating the drone three times along its horizontal and vertical axes.

This only needs to be done once, before the drone’s first flight. After this step, the drone’s lights will alternately flash to indicate that it’s attempting to acquire a GPS signal. If you’re flying the drone inside, you’ll need to turn off this feature with a quick press of the appropriate button on the controller.

Once the signal is acquired (or you’ve turned the GPS feature off) you’re ready to fly.

Beyond this, if you want to take photos or record video, you’ll need to either insert a micro SD card into the underside of the drone or use the app to record images and video directly on to your phone. Be aware that an onboard SD card will provide better quality images and video as it won’t be dependent upon the wi-fi signal strength between your drone and your phone. 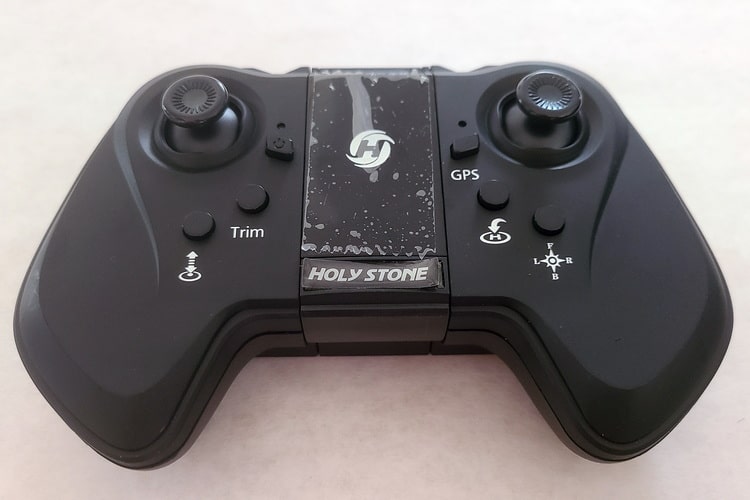 The controller doesn’t have a lot of weight to it and feels like it’s mostly empty inside. While this isn’t necessarily a problem, if you like the feel of a good, solid controller that feels like it could take a little bit of a beating, then this isn’t it.  Unfortunately, it very much feels as though it could break into pieces if you accidentally dropped it on the ground.

That said, it worked without any problems. The buttons and controls might feel plastic-y but the joysticks moved easily in all directions.

The cell phone holder worked well too. It has a strong spring-loaded mechanism that doesn’t feel too flimsy and it does a reasonable job of holding the phone in place. However, there are no lips at the top or bottom of the holder to stop the phone from potentially popping out.

Weighing in at just 6.2 ounces (including the battery) you might think the drone might also be flimsy, but it’s not actually the case. In fact, it feels surprisingly solid and is able to hold its own while in flight. It also folds down to a very compact 5.5 x 3.5 x 1.5 inches, making this a drone you can take almost anywhere.

The only potential criticism of the drone itself is that the blades feel a little thin, and without guards, they could potentially scratch if they hit a solid object. However, since the blades fold, rather than stay rigid, they’re able to move if they hit something, which will help to minimize any damage. (And, just in case, there are four replacement blades included.)

Lastly, if you’re worried about damage, the included case should do a great job of protecting the drone and controller against any knocks and drops. It’s not a true hard case, but it’s not soft either and it does a very nice job of keeping everything securely packed. (Incidentally, it’s worth keeping the small black card box the batteries came in, as it’ll stop the batteries from moving around in the case.) 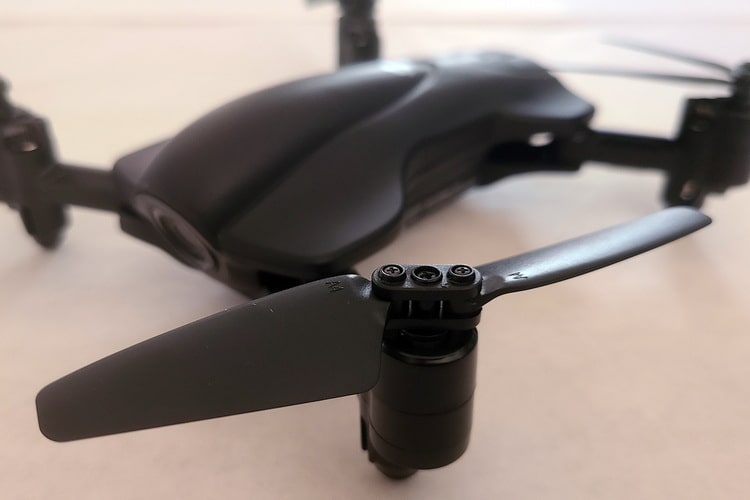 Overall, the HS165 (available here) flies very well. It was tested on a clear day with little to no wind and it was able to hover and fly without hardly any drift. Its ceiling is probably around 20 meters (65 feet) as it wouldn’t go any higher, but this was enough to get some decent views of the surroundings. It’s also very easy to control, although (like many other drones) it’s easier to fly with the controller than via the cell phone app.

Flight time was good, although it’s hard to estimate exactly how long the drone battery lasted as it wasn’t flying constantly. The indicator on the app showed a low battery after about 20 minutes of use, but the drone was still able to perform all its functions. 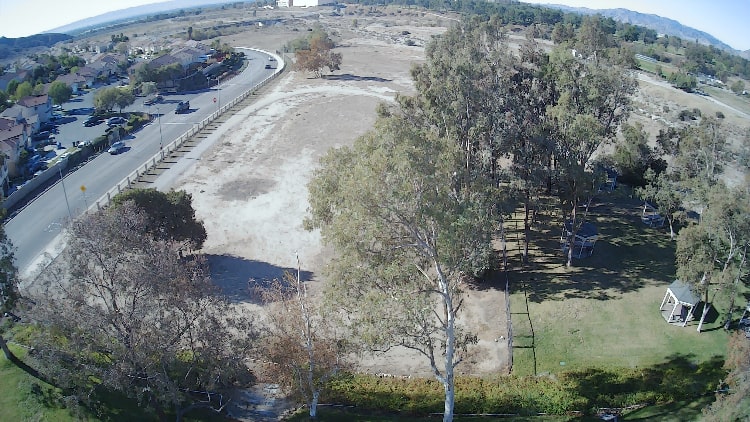 The primary features and functions listed below can be easily performed via the controller with the push of a button and/or the movement of a joystick, with many of them also available via the app. It should be noted that there are no flips or stunts with this drone.

Generally, the app performed well, although it did crash once (fortunately not while the drone was in flight.) Besides the functions mentioned above, the map and live video, the app will also show useful information such as the signal strength, the drone’s battery, its height and distance, plus its vertical and horizontal speed. 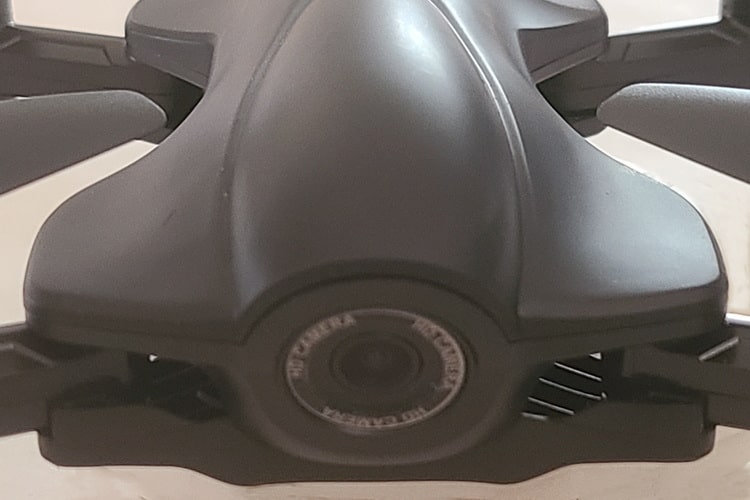 Although this is a good choice for families, younger children will probably need to be supervised as it’s not a basic drone that’s been designed for their age group. Teenagers will probably find it easy enough to control and the whole family should have fun shooting video and taking pictures.

It’s also a great option for beginners looking for a drone they can learn to fly before moving on to the more advanced features that can be enjoyed with a little more experience. Intermediate fliers will also appreciate this inexpensive, portable drone that’s capable of providing so much more than just a basic flying experience.

Relatively inexpensive, compact, easy to fly and packed with features that include GPS and high-resolution video, it’s hard to find a reason not to like the HS165 (available here). It’s a great entry-level drone for beginners that almost anyone can use and promises to provide the user with many fun hours of flying.

If you’re looking for more information about drones, we’ve created a series of guides to the different drones available. You can check out our overviews of the best mini drones for kids and the best drone under $200.